My client who ran into this problem is using a brand new Mac Pro (Early 2009/Nehalem) with two NVIDIA GeForce GT 120 display cards. This dual-card setup seemed to be the most expedient option, since they wanted to use two of the new 24″ LED Cinema Displays, and each GeForce GT 120 has one Mini DisplayPort and one DVI port, and the DVI-to-Mini DisplayPort adapters don’t seem to be shipping yet. So, two cards, two monitors, one hooked to each with the way too short Mini DisplayPort cables. Easy peasy.

That is, until you want to start using the Digital Cinema Desktop Display (hereafter DCDD) option for Video Out in Final Cut Pro. This means that instead of FCP using a dedicated video device (like an AJA or Blackmagic Design card) for output, you’re previewing the video on a second computer monitor. However, with the two monitors connected to two different display cards, this seems to present a problem. The DCDD video will only play on the Main display (the one where FCP’s Canvas window resides). On the other display, the DCDD outputs only a big white rectangle where the video should be.

My first thought was, maybe there’s some restriction where the video will only play properly is both displays are controlled by the same card. I was half right. 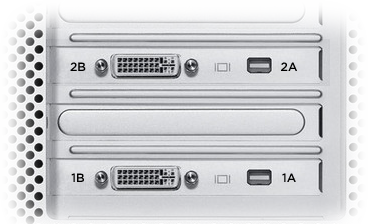 The two 24″ LED Cinema Displays (hereafter LEDCD) were plugged into the ports I have labeled here as 1A and 2A. Since we didn’t have any adapters, we thought the next best thing to try would be adding a DVI monitor to the mix. In this case, an older 23″ Apple Cinema Display (hererafter ACD).

We first tried plugging the ACD into port 2B with only one LEDCD attached to 2A. Nothing Was attached to 1A or 1B. In this case, everything worked great, the main FCP display was 2A and the DCDD output showed properly on 2B. However, when we reattached the other LEDCD to 1A, this disturbed our delicate balance. Even when we made sure the main FCP display was 2A, the DCDD output reverted to 1A. There doesn’t seem to be any preference in FCP as to which of many multiple monitors should be the DCDD output (if I’m wrong on this I’d sure love to know), so we fiddled about for a bit with the Mac OS X Displays PreferencePane, switching menu bar and monitor arrangement around in every configuration imaginable, all to no avail.

So, now we have a theory based on a tiny amount of anecdotal evidence that FCP uses only the first two displays it can address on the PCIe bus for the FCP main display and the DCDD output, interchangeably. Perhaps this issue is old and occurred with older display cards too, but I only just now noticed it because it’s the first time I’ve run with two cards for this kind of setup. If you have any evidence to either corroborate or contradict this theory, please leave a comment and let us know.