How to stop Netflix Auto-play

Netflix started auto-playing TV shows on the iPad last year — if you have episodes left in the series, it would cut out about 30 seconds early from the end credits of your show, and jump to start playing the next episode (often also skipping the “previouslies” at the start of the next episode, which can be helpful). With the most recent update of the AppleTV firmware, this autoplay behavior came to the big screen as well.

Now, this completely drives me nuts. I’m the kind of person who watches the movie credits all the way to the end, because that’s how I respect the hard work of the people who created the film. Plus, I get to hear the theme music, and for a guy whose CD collection was once half comprised of movie scores and soundtracks, that’s an important part of the experience. Great TV shows, for me, really aren’t much different.

I realize it’s probably a matter of “this is what most people want”, but I like the credits. I like the music. I like the little kids shouting “bad robot!” I also like deciding whether I play the next episode, or whether I really ought to go to bed because I actually have work to do in the morning.

Yes, you can swipe down on the iPad to keep watching to the end, and you can use the AppleTV remote to cancel out of this, but remembering to leap into action in the five seconds it gives me every time I watch an episode isn’t my idea of fun.

Thankfully, as I discovered last night, Neflix finally did give us an opt-out back in late January. Judging by the response I got on Twitter this morning, a lot of other people had been waiting for the same solution. Here it is:

To disable Post-Play’s autoplay feature on a Netflix profile, navigate to Your Account, click Playback Settings, then uncheck the option to Play next episode automatically. Other Post-Play features will still be enabled — this setting simply turns off automatic playback of the next episode. 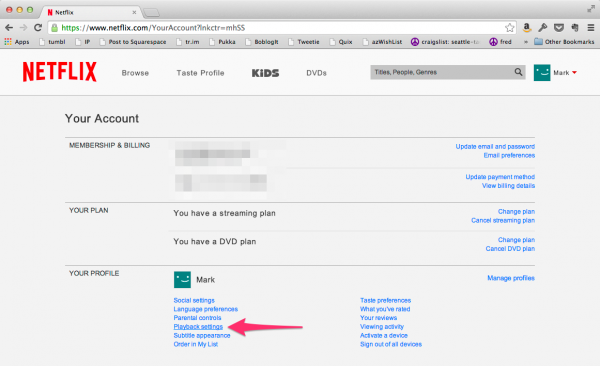 And uncheck the option to “Play next episode automatically”: 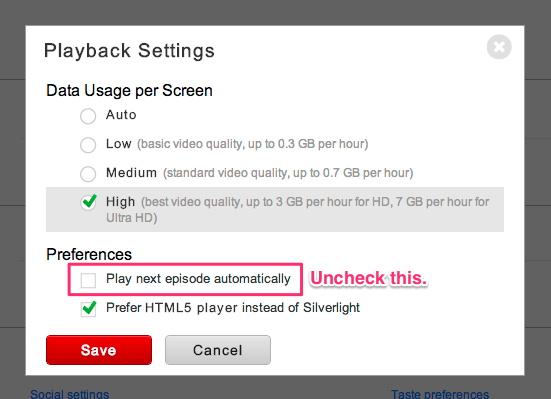 I did this last night, and once I had, both the AppleTV and the iPad immediately obeyed the settings. The iPad still shrinks the video and shows you the thumbnail for the next episode, but at least it plays all the way through and doesn’t auto-play the next one.