Earlier this evening, I went out to get a ReplayTV and bring it home. Silly me.

If you’ve never heard of it, it’s a lot like a TiVo. Records TV onto a hard drive for later viewing, lets you pause live TV, things like that. In short, very cool stuff. The electronics chain Tweeter is the only place that carries it in my area, so I bop down to the local one on my way home. A guy there spends about 15 minutes trying to set it up to demo for me. I wouldn’t have bothered, but I figured since a friend of mine has a TiVo, I might as well play with the menus a bit– you know, compare and contrast.

Anyway… he eventually gets it set up. I play with it for 45 seconds. I say, “Okay, I’ll take it.” We go over to his little cashier stand, and discover that they’re all sold out. The next closest store (a half hour away– we’ll call it “store #2”) has one, but it’s being held for a customer. No other store in Maryland has it, but some ones in Pennsylvania do. “Oh, great,” I think. I’m told they can have a truck swing by there and transfer one to my local store in only 7 days! “Even better,” I think, and ask them to let me sleep on it. It’s Friday night, and I wanna play with my new toy over the weekend. I’m betting that I can have it shipped to me tomorrow if I order it over the web… so home I go.

Halfway home, it occurs to me that maybe it’s getting a little late in the day for getting a web order rushed out for Saturday delivery. So I get ReplayTV’s phone number, and call. “No way we could get that out for Saturday delivery,” the guy on the other end of the line admonishes me. “It takes 24 to 48 hours of processing before we could even ship it overnight.” I find myself wondering what they do to it during that processing time. Is this company so attached to their products that they have to throw every shipment a going-away party?

When I get home, I call Tweeter store #2. “Are you sure you have to hold that one for someone else?” I ask. He assures me they do, but informs me that several other stores in Maryland do, in fact, have them in stock, including one in Tweeter store #3, about an hour away. “Fine,” I say, “will they hold it for me?” He tells me to call them and ask. I do. They will. An hour later, I am the proud owner of a box that says “ReplayTV” all over it. Tired, and finally satisfied, I head back home.

That’s right. Apparently my particular unit wasn’t informed of the 10-day grace period that you’re supposed to have before you must activate your service. Oh yeah– I forgot to mention. Beyond paying for the unit itself, you also have to pay for the privilege of downloading your local TV listings into your unit. Anyway, instead of 10 fun-filled days of free service after completing all the setup, I get to look at this: 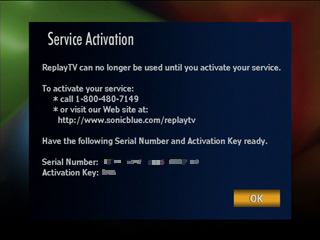 Then, I figure, “Hey, maybe their Web store thing is automated,” so I go on the web, and pay for the activation. “Congratulations!” they say. “Thank you for activating the service on your ReplayTV!” they say. “ReplayTV can no longer be used until you activate your service,” my ReplayTV still says.

The confirmation email includes a promising-looking “Activation Key” number. There is no place to plug this in on the screen that tells me that my several hundred dollars worth of electronics is useless until after a few Californians have had a nice, peaceful weekend, probably watching recorded programs on their own ReplayTVs. All I can do on that screen is click “OK”, as if somehow the upbeat, positive term “OK” will make me feel better about the whole thing. Buttons on windows like that shouldn’t say “OK,” they should have something more appropriate, like “Well, Crap,” or perhaps “Bugger ME!”.

So, I resign myself to thinking maybe– just maybe, my ReplayTV will contact their servers later tonight, and realize the silly mistake it made, and I will wake up to a gloriously restored ReplayTV in the morning.

More likely, some poor ReplayTV rep is gonna get an earful from me about their stupid, crappy, stupid, stupid machine, and how I had to wait until Monday to start using it, because I sure as hell wasn’t gonna drive all the way back to Tweeter store #3 just to return it with righteous indignation– never mind the fact that I’ll probably end up liking it a lot once I’m able to actually use it. 😛

At least it’s a very pretty silver box. Matches my TV quite nicely.