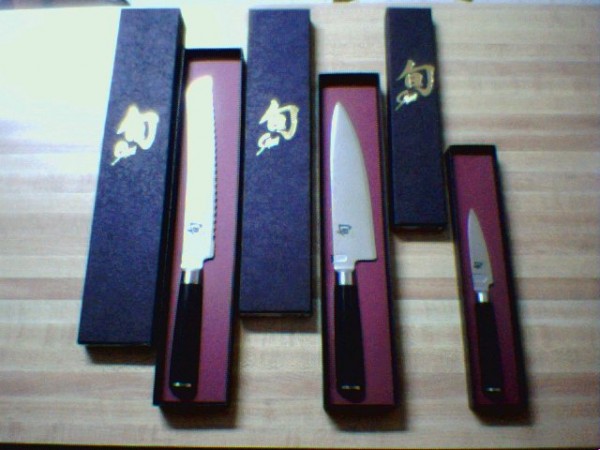 I got new knives! They’re the “Alton Brown Set” of Shun knives from Kershaw (as AAl asked, “are they named that because of the sound they make when they cut?”). The set included a bread knife, the 8″ chef’s knife, and a paring knife. You probably can’t tell from the picture, but the side of the blades have a moire-like texture, as multiple layers of steel are folded over themselves multiple times to form a very strong forged blade. Reminds one of Damascus steel (think of really well-made mediaeval swords or, better yet, katanas– they are Japanese, after all).

If you know anything about the sorry state of the knives I have in the house (it’s nearly impossible for me to cut through the skin of a tomato without vigorous sawing), you’ll know just how excited I was to finally see these arrive.

So, of course, I immediately searched for something to chop to little shreds with my dangerous new knives. First to go was a remaining chunk of hearty homemade bread in the breadbox, which the bread knife had no problem dispatching with swift smooth strokes.

But then came the onion. Long my nemesis, chopping had evolved into a complicated process wherein a multi-tined implement (acquired by Reb from one of those silly tupperware-like parties for “chefs”) was shoved into the onion, ostensibly to provide guides for chopping the onion but, in reality, to keep the force of the dull knife from causing the half-chopped bulb to spray in all directions.

No, this was a different world of chopping altogether. The chef’s knife was sharp enough to pass down through the layers of onion without adding force sufficient to push them apart. For the first time in many, many years, I was able to successfully chop an entire onion without excessive force, Goldbergian machinations or personal injury.

Well, okey… maybe a little personal injury. I had grown careless with the common dullness of my former knives (now all thrown away) and gave myself a little nick on the knuckle, but I’m sure I will quickly learn to respect these mighty examples of true cut-lery.