Let me start with how Mac OS X deals with removable drives. When you plug in a FireWire or USB drive, or even toss in a CD or DVD, those drives pretty much just appear on the desktop, right?

Sure, but underneath the glossy Mac surface, the Unix system does something else. It creates an alias to the drive, and puts it in the folder at the root of the drive you start up from (your boot drive). That folder is known as /Volumes. You don’t see it? That’s because Mac OS X hides it from you — it’s a special folder that normally the system uses just fine on its own, thankyouverymuch, and doesn’t want you mucking about in it.

However, you can get to the folder by going to the menu item Finder > Go > Go to Folder… 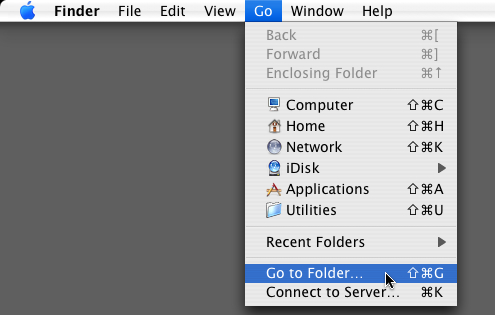 …and in the dialogue box that pops up, type /Volumes (capitalization counts):

Then it will pop up the folder in question, and you can see what’s in it: 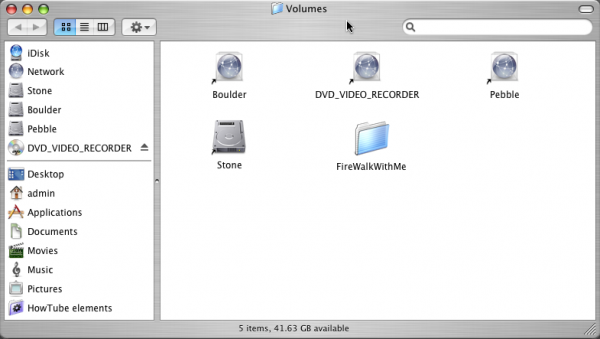 Now, you can see here that my startup drive, Stone, is listed, as well as my 2 extra drives, Boulder and Pebble. Even DVD_VIDEO_RECORDER, a disc I burned on my living room DVD recorder shows up in here. Those little curved arrows in the lower left mean they’re aliases, which aren’t real folders at all, but just a pointer to the original drives.

You can also see that there is a real folder that is called FireWalkWithMe. Well, that’s the name of my portable FireWire drive, but that’s not connected to my Mac right now— so what happened?

Some of the apps that run on Mac OS X are much more in tune with the Unix side than the Mac side of things, and so if, for instance, you have set your removable drive as the default place for it to save things, the app may just assume that drive is always going to be there, instead of checking to make sure that it actually is.

In this case, the app I had been using was Azureus, which while being an otherwise great BitTorrent client, was negligent in this way. I had foolishly set the default save directory to my FireWire drive, and according to Azureus, that meant it was saving things to:

So what happens is the next time I download something with this app, it tells the system to write to that path, first the hidden Volumes folder, then the FireWalkWithMe folder, then the saved file. But if my drive isn’t attached, Azureus doesn’t know, and so the system, not smart enough to know otherwise, takes that directory at face value, and when it encounters a folder in that path that doesn’t exist, it goes ahead and creates it, hence the creation of the real FireWalkWithMe folder that is not an alias to my portable drive.

So, now I get this folder that Azureus has saved files into that has the exact same name as my FireWire drive. So, what happens the next time I connect my drive? Well, most of the time Mac OS X is smart enough to create an alias with a slightly different name, like FireWalkWithMe1, and still mount it on your desktop. However, sometimes it gets confused enough to not mount your drive at all, thinking since there’s already a folder in there with the same name, it must already be mounted. Even if it does mount okay, there still the issue that the app that mistakenly created that folder will go right on saving into that folder instead of your drive, because it’s still telling the system to look for /Volumes/FireWalkWithMe and not /Volumes/FireWalkWithMe1.

So, how do we fix this? Pretty simple, now that we know what to look for. If you Go to the /Volumes folder, and there’s a real folder in there, first check to make sure there isn’t anything inside you want to save, and then chuck that folder in the trash. The next time you connect your removable drive, it should mount with its proper alias name again. Yay!