I was looking at my Netflix history earlier, and was wondering how my rental frequency was trending. So, in the interest of being complete, I went over my entire history, including my GreenCine subscription (which I have because they carry some rare movies that Netflix doesn’t) and RedBox rentals (which I use every once in a blue moon, just because I’m craving something new, and there’s one o’ them robot vending machines at my grocery store).

Here’s a graph with the number of rentals per year since 1999: 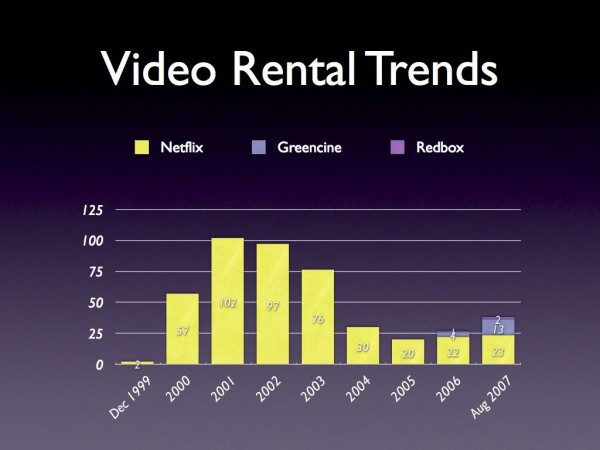 My usage spiked the first few years I had the service, but lately it’s been in decline, I believe due to the long hours I’ve been working on a certain cable TV show since mid-2004. The frequency is interesting to note:

It’s not shown on the graph, but I noticed spikes in my viewing when I would try and follow the movie marathons done by Sam and Adam at the Filmspotting podcast.

More interesting, though, is how my viewing habits affect the average rental price for the various services: 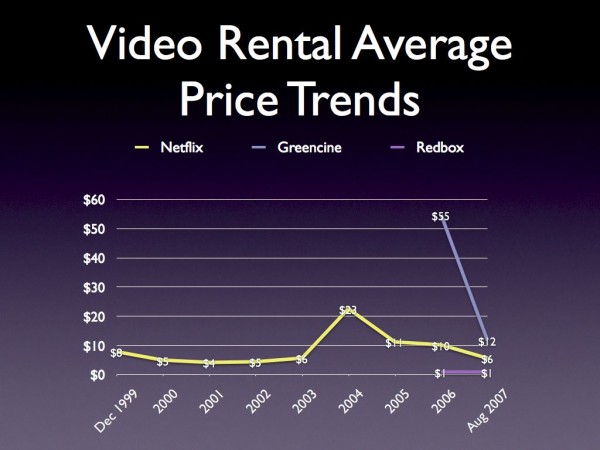 Of course, as my viewing frequency went down, average price shot up, starting in 2004. But more disappointing, my average prices never once fell below the cost of renting at the local rental chain, which has stuck at about $4 for a while now.

Certainly, it’s more convenient, and with the queue and massive selection of the mail-order rental places, I’ll see a lot of movies that I’d never just grab off the shelf because I’m in the mood for it. Although, even if I was “in the mood” for a lot of the more obscure stuff, I’d have real trouble finding it locally. There’s one rental place near where I work a lot (Video Americain) that has an excellent selection, but there’s still items on my (full) queue that they don’t have.

So, I suppose in the grand scheme of things, with the selection and convenience, it’s a wash, but I’d still like to get that average price down below five bucks again.