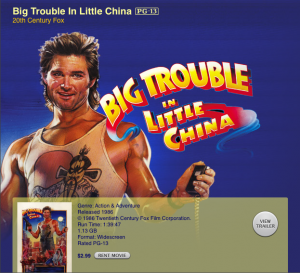 What do you mean you haven’t seen this? Kurt Russell channeling John Wayne, Kim Cattrall when she was still hot, every asian character actor who’s ever acted in Hollywood ever, Kung Fu, black magic, and three scary guys in wicker lampshades. Oh, and it’s directed by John Carpenter, fresh off of Starman. It’s got more fun, creative spirit than 99.9% of the recycled crap that hollywood puts out these days. No excuse! You see now! 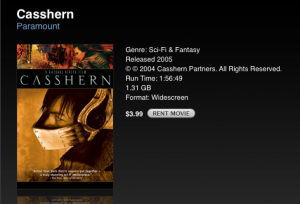 It doesn’t make a whole lot of sense, but what this anime-like live-action tale lacks in coherence, it makes up for in style. Seriously, I have no idea what the plot is, even after seeing it several times, but much like Sky Captain and the World of Tomorrow, it defines an aesthetic and sticks to it, amazing you again and again with beautiful imagery. In fact, it’s probaby better than Sky Captain, as at least it’s in another language, and you can pretend that the acting is really, really good.

[Yes, I know that’s a very anglo-centric view. But it so happens I only speak fluent Anglo, so the shoe fits.] 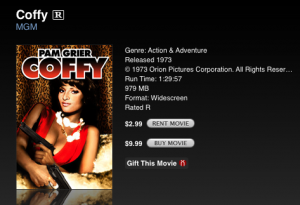 Like Death Wish, but Pam Grier is a hell of a lot easier on the eyes than Charles Bronson. Blaxploitation at its finest. In fact, the original tagline was “Coffy… she’ll cream you!” Need I say more? 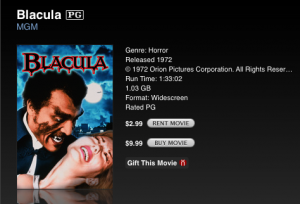 Hammer horror meets blaxploitation. A two-century dead African-prince-turned-vampire rises again to suck the blood of Los Angelenos? Count me in! 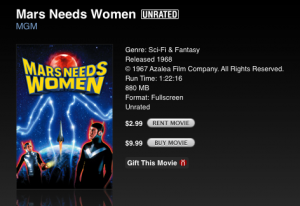 Yes, I realize I’ve strayed far into “so bad it’s good” territory at this point, but really, for only $2.99, this is worth it. Mars will blow up the earth unless we give them five of our Earth hotties. Strippers, in fact, seem the prefect candidates. (There’s one scene in a strip club that goes on and on without anyone taking anything off— this was the 60s, after all.) It’s kitchy without being intentionally campy. Ripe for your own private MiSTing with some friends and a few Mai-Tais.

What are your favorite iTunes rentals?