What George Lucas can learn from Bruce Campbell (and AAlgar)

Almost a decade ago, I first met Bruce Campbell at his book signing for “If Chins Could Kill” at a bookstore in Arlington, VA that no longer exists. Of course, “meeting” a celebrity at any sort of signing can hardly be said to be a meeting at all. Maybe you get a minute or two to chat, and he signs your book or your DVD or your mammaries and you’re off. Unless you were the lady a couple of people ahead of me whose cellphone kept ringing and Bruce demanded to be handed it so he could answer it for her. Hilarity ensued. Something involving the condition of a certain Oldsmobile for sale, if I recall.

Some of the text here got lost when migrating to a new blog host, but I think I probably said that when it was my turn, I asked Bruce to sign the book “No more blue people,” which he did: 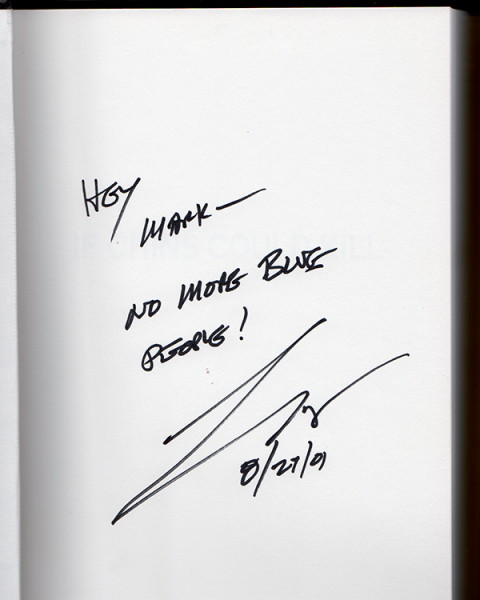 He asked me what it meant, and I told him the sordid tale of my friend AAlgar and the film that we made for our senior drama project in high school, featuring said blue people. We then went on to create an enhanced version for winter holiday presents that year, and a few years later, created a further-enhanced Director’s Cut and even a mockumentary focusing on the creation of the film, going as far as shooting new footage with AAl in the blue makeup again in an office swivel chair made up for the Captain with an Okudagram-style touchpad — which included the command “[…]

More text lost here, but I bet it was about the “Tannen Meathook Maneuver”:

[…]Back to the Future and Star Trek fanboyism.

The upshot of all that being: I wanted a reminder to myself, from someone whose work I admired and respected, to stop re-hashing the same old projects over and over, and move on to bigger and better things.

George Lucas now plans to convert all of the Star Wars films to 3D and re-release them starting in 2012.

George, I beg of you — no more blue people.