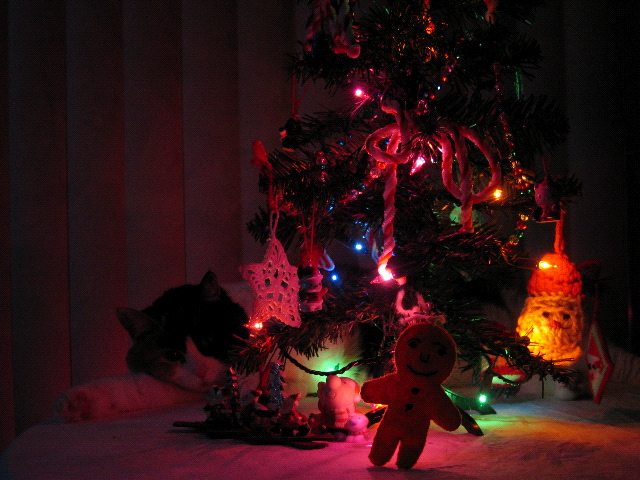 Figlio was my first real pet, and by “real,” I mean “not a goldfish.” My dad didn’t want any mammalian pets in the house, and so I never had one as a child. We adopted Figlio a little over six years ago from a lawyer whose fiancé was allergic to cats. She hid under the bed a lot during that first week or so, but eventually ventured out to explore the apartment we rented, and these strange beasts called “children.”

Figlio had many homes over the years: A pillow here, a coconut fiber doormat there. Her final home was a small cushioned bed at the far end of the red leather couch in our screening room. This room was her domain. Enter it, and she would demand to be heard. Or at least petted. When we sat down to enjoy a movie, she would climb up on the back of the couch to sneak around and try to steal our food. Occasionally, she succeeded.

She was extremely vocal. She would call up the stairs if she felt confused or alone, more often in her last couple of years as her hearing started to fail. She wanted to be with me all of the time. If I went off to my office, she’d wander in, demanding to know when I’d be coming back. If I stayed long enough, she’d park herself at my feet until I nudged her accidentally. And then she’d shift over an inch and lay down again.

She would stand up on her hind legs and paw at you to claim you… or stretch, or whatever the heck it was she was actually doing. She would sometimes come up to me, if I were sitting, and stand up tall, putting her forelegs over my thigh, peering up at whatever it was I was doing. Sometimes, when she enjoyed the pets she received so much that she arched backward, she lost her balance, and tumbled backward from this position. I can’t say that she always landed on her feet, but she was awfully cute when she fell.

I tried to give her a bath once. Once. She was very vocal then. And wet.

Whenever we would have a tree in the house for the holidays, she would sniff it. And sniff and sniff and sniff. And drink the water out of the tree base. She was an indoor cat, but she loved the smell of the out-of-doors, poking her nose out of the doorway whenever possible. Once we moved into our current house, I would sometimes let her out onto the wooden deck, to explore and sniff around. Every once in a while, she would try to venture down the stairs into the lawn, but she usually decided it would be better if she were to come back inside, where her family was.

Now she rests in a small grave, beneath the branches of a flowering dogwood tree, in the yard she longed to explore.

Farewell, Figlio. You were the best damn cat a guy could ever have. I’ll miss you terribly.