I just bought a used Mac Pro yesterday, and the latch that releases the side panel opened just great when I was looking it over. However, this morning, when I gave it a go to pop in a video card, instead of the satisfying thunk of the latch’s usual opening, I heard scrunch, and the panel was still firmly attached.

So, something in my latch mechanism inside the case was busted. Yay.

Thankfully, there is a way to force it to unlatch if you have something stiff enough, yet small enough to fit through the perforations on the front of the case. I used a thin hex wrench from the now-defunct Marathon Computer (they used to make rack mounts for G4 and G5 Macs); a paperclip won’t do.

The place to push is about 1 3/8” below the edge of the bottom optical drive slot, on the right hand side; just above the internal drive bays: 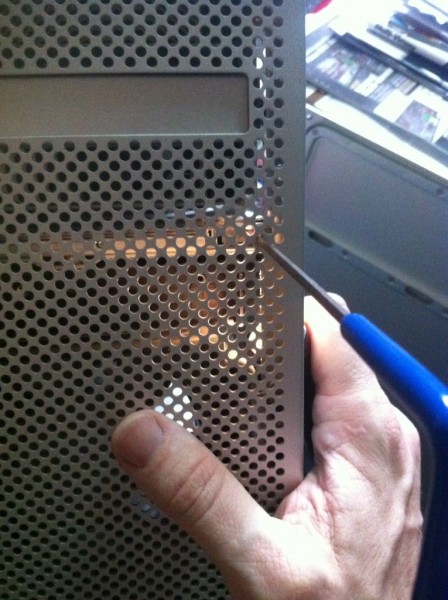 Some text here was lost in a blog host transfer.

[…]this thread in Apple’s Support Discussions for the nudge in the right direction.